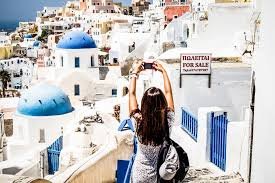 For two balmy weeks in July, hotel manager George Tselios dared to hope his pandemic nightmare was behind him. He was getting 100 bookings a day for his Rhodes seaside resort – “unthinkable numbers” for the past year and nearing normal levels.

Then the island was downgraded to “orange” on Greece’s Covid-19 map – one level before curfews and other tough restrictions become mandatory – and bookings sunk to around 50 a day. The uncertainty that had plagued tourism since early 2020 was back, to the despair of Tselios and others in an industry that is Greece’s economic mainstay and provides one in five jobs.  “You can only see two to three weeks ahead, maximum,” said Tselios, whose Blue Sea Resort draws visitors from Germany, Britain and Scandinavia. “This is a transitional summer.” Following a catastrophic year for global travel, June data for Greece was promising.

International arrivals jumped more than 13-fold that month versus 2020, easing fears about a possible wave of bankruptcies among tourism businesses.

But August bookings are patchy, and industry officials say it is too soon to predict how the summer will unfold.

“For the first time in years, a secure forecast for this year’s tourism revenues cannot be made,” Yannis Retsos, president of tourism confederation SETE, said last week.

“The positive momentum could, at any moment, be overtaken by insecurity, and vice-versa.”  In a sign of hurdles ahead, Greece, which relied heavily on promoting “Covid-free” islands to draw tourists back, was forced to impose a week-long curfew and music ban on its party island Mykonos after infections surged this month.

On Rhodes, another popular island, with over 2.5 million visitors in 2019, business owners worry that the broader south Aegean region may be marked “deep red” by the European Centre for Disease Prevention and Control, and that big-spending German tourists may stay away.

In June, the Bank of Greece said it would take two to three years for travel and spending to return to the record levels of 2019 when Greece saw over 33 million tourists and 18 billion euros ($21.3 billion) in revenues. It forecast this year’s revenues would be 40% of 2019’s levels.

Ioannis Hatzis, who owns three hotels on Rhodes and sits on the board of the country’s hoteliers federation, said he believed that target could be met, even if demand dipped in the coming weeks.

“It is a summer of patience,” he said.

The sentiment was echoed by Grigoris Tasios, president of the Greek hoteliers federation. “We’re doing much better than last year,” he said.

However there are likely to be tougher financial times ahead, with the Bank of Greece warning that tourism businesses would be most at risk when banks removed loan moratoria and the state withdrew financial support once the pandemic ends.

About a quarter of loans to the sector are deemed non-performing, which could pose a broader problem for Greece’s weakened financial system.

Ahead of the reopening of tourism in May, Tselios and other business owners interviewed by Reuters hoped for a strong season . But with coronavirus variants causing havoc with government planning in Greece as well as in key markets, nobody wants to be over optimistic. Paris Kakas, who runs the Sea Dreams ferry company on Rhodes, had told Reuters that his company was struggling under millions of euros in bad debt. Now, halfway through the season, he is no closer to repaying his loans.

“Compared to what we were expecting, things are going well. But it’s nowhere near what we could do in a good season,” Kakas said.