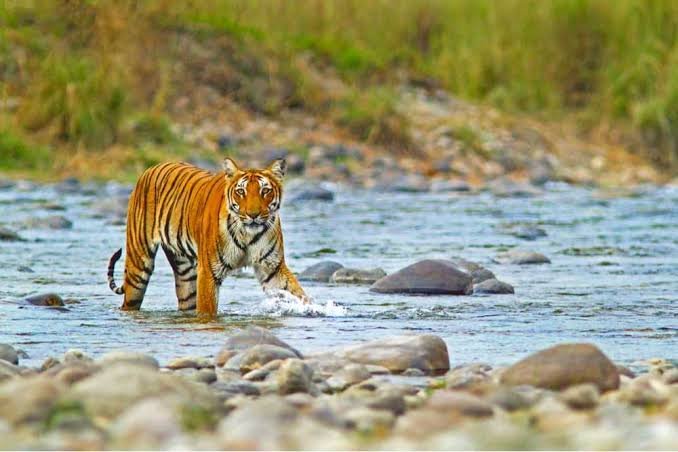 It was early 1860 when Major Ramsay of the British Army, evicted the Boksas tribe, along River Ramganga and foothill of Himalayas of the princely state of Tehri Garhwal. The action was meant to preserve the forest against cultivation and cattle farming by tribes and locals. Thus, the seeds towards the formation of Reserve Forest were sowed.

Later in 1879, the moist deciduous and subtropical pine forests securing several and rare species of plant life patches, having numerous ravines, ridges, minor streams and small plateaus secluded within the Lower Himalaya and Shivalik range was taken up for conservation.

The idea of setting up a National Park was suggested by the several Britishers, including E.R. Stevans and E.A. Smythies in the early 1900s. Then, the British Administration took initiative and considered the possibility of establishing a game reserve in 1907.

The process of setting the boundary was led by Sir Edward Jim Corbett in the year 1930 and a part was named as “Hailey National Park” after Sir Macolm Hailey, the then Governor of the province, covering an area of 323.75 sq kms which became Asia’s first national park, harboring the largest animal of the Cat family – Panthera tigris to make it one of its kind as a Tiger Reserve.

After independence the park was renamed as “Ramganga National Park” and in 1955-56 it was named as “Corbett National Park”. In 1973, the rich and wild ecosphere was picked out as a location for launching “Project Tiger”. 20th century had seen the initiation of the process of demarcation of Corbett Tiger Reserve and the entire Kalagarh forest division including the area of Sonanadi Wildlife Sanctuary.

Corbett National Park has reported the highest tiger density among India’s 50 tiger’s reserves with 14 tigers per 100 square kilometers. According to the annual tiger population estimation exercise jointly conducted by the state forest department and the World Wide Fund for Nature (WWF), with an increase of 21 from 231, Corbett National park now has 252 tigers. Of the total 252, 119 are said to be females, 91 are males, while 41 remain unidentified.

The national park has 7 Safari Zones for wildlife enthusiasts. The forest is surrounded with many places to stay in and outside the buffer zone.

Altogether, the Jim Corbett National Park which has a number of vast eco spheres that displays a plethora of varied species of plants and animals in particular to highest number of tiger count in the country, is an invigorating and natural hub to myriad eco-travelers, adventure and wildlife photographers.