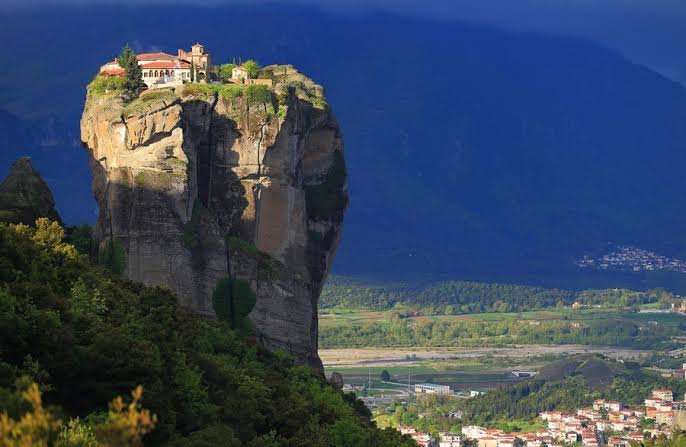 Did you know that there are places across the world that feature certain gravitational anomalies? Well, there are actually places that remain perfectly balanced on mountain cliffs or at heights that seem to completely defy gravity. If you are intrigued to know about them, here are our top picks.

These Byzantine monasteries are perched upon 60 million-year old sandstone megaliths that rise to an height of an average of 1000 ft. The sight of the monasteries seems like they are the rocks’ crowning glory. Records state that they were built between the 14th and 17th centuries, and are now one of the most visited tourist hotspots in Greece.

The 150-room Cliff Palace sits perfectly under a natural shelter of sandstone rock, in Mesa Verde National Park. Records suggest that the palace was built by Ancestral Puebloans in the 13th century, and was built using mortar, sandstone, wooden beams, and tiny pieces of stone embedded in the mortar to strengthen it. Today, it’s known for being the largest, as well as the best-preserved cliff dwellings in North America.

Built more than 1500 years ago, the Hanging Temple of Shanxi is truly an architectural marvel. This temple is built into the side of a cliff near Mount Heng in Shanxi Province, China, and has been constructed without any wooden pillars, which seem like supporting it. With 40 rooms that are linked by a maze of passageways, the temple was originally built by drilling holes into the cliff that hold up the temples.

This extraordinary hamlet of Haid Al-Jazil lies in the heart of Yemen’s desert valley, which is known for its notorious hot and dry climate. If you plan a visit to this place, you will find this 500-year old settlement comfortably sitting on a boulder that rises to a height of 350 ft above the ground, and which makes it one of the world’s most beautiful, yet isolated places to visit.

Interestingly, in 2004, when the latest census was taken, it was found that 17 people were still living there.

The sight of Mount Popa Monastery in Myanmar will mesmerise you with its unique charm and ambience. This spot certainly will give you an otherworldly feeling, as you get to witness the rays of sunshine cutting through the clouds and highlighting the monastery in an unique manner.

Built by a hermit in the early 20th century, it has now become an important site of worship for Buddhists within the Nat tradition. To reach the spot, one needs to traverse 777 steps, as well from the constant threat of Rhesus macaque monkeys that seem to be guarding the monastery.

Next post Dwayne Johnson, Gal Gadot and Ryan Reynolds starrer Red Notice is set to release on Netflix on November 12