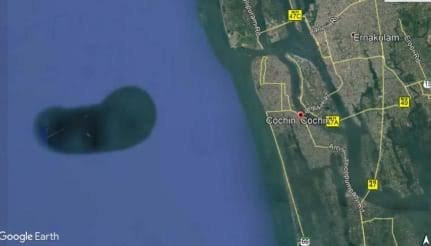 A new bean-shaped island-like structure has been witnessed off the coast of Kerala’s Kochi in the Arabian Sea in satellite imagery from Google Maps. A screenshot of the same has now gone  viral, and has left the experts baffled as it was never spotted earlier.

The pictures were first shared on Facebook by the president of an organization, ‘Chellanam Karshika Tourism Department. Although as of now, there is just this image available, its physical presence has not been witnessed yet. Reportedly, the formation seems likely to be the size of West Kochi.

With the Facebook post is going viral, officials from the Kerala University of Fisheries and Ocean Studies are now planning to investigate the matter.

Referring to this discovery, K. Riji John, Vice-Chancellor of the university, said that looking at Google Maps, this looks like any other underwater island that we see across the globe. There  have been similar observations and there is a specific shape also for this, he added. But we do not know what it is made of- whether it is sand or clay and whether it is distributed regularly, he informed.

John said that usually, due to underwater current, processes like accretion or erosion of the coast are observed. Elaborating on this, he explained that accretion basically means the sediment comes back to the coast, and that this is a common phenomenon, which occurs in the southern part of the state. However, the Vice Chancellor also mentioned that they can give solid answers only after carrying out a thorough investigation.

Next post Bizarre planet: This fish from dinosaur era can live for over 100 years