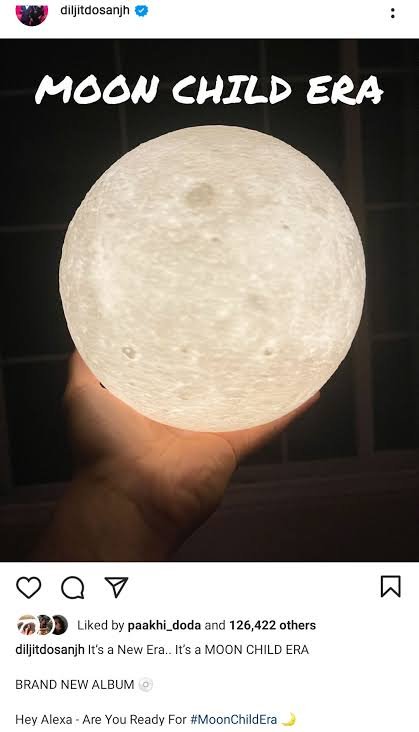 Diljit Dosanjh is one of the most praised Punjabi artists today. The singer turned actor enjoys a huge following for both his singing and acting skills. After enjoying the success of his album G.O.A.T which released last year, the artist has come forward and announced a brand new album.

Diljit, who broke all records and created hysteria among fans with his last album seems ready to repeat the effect with yet another one. Making his big announcement, Diljit took to Twitter to post a picture of a glowing moon model with ‘moon child era’ written over it. Sharing the picture, the singer wrote, “It’s a New Era.. It’s a MOON CHILD ERA BRAND NEW ALBUM Hey Alexa – Are You Ready For #MoonChildEra.”

Having broken the big news to his massive 5.2 million strong followers, the post announcing Diljit’s album Moon Child Era quickly found its way to trending charts. Fans of the Good Newwz actor rushed to retweet the post while expressing their excitement in the comments. The album will be a major comeback after working in back to back films.

Diljit’s album G.O.A.T had ranked number one on the Billboard Top Thriller Global Chart last year, which had landed him a memento from Billboard. The singer had then taken to Instagram to share an unboxing video of the memento. Through the video, he thanked his fans and his team and said that he would come back with an even greater hit next year.

A look at Diljit Dosanjh’s songs and movies

The Punjabi singer delivered several super hit songs in Punjabi as well as in Bollywood over the last few years. Diljit Dosanjh’s songs include Dil, Ishq Ho Gaya, Muchh, Surma and Welcome To My Hood. Punjab 1984 and Udta Panjab were some of the movies that largely contributed to his success in the film industry alongside films like Ambarsariya, and Sardaarji 2. The actor will soon be seen in a Punjabi romantic drama, Jodi, set to be released later this year along with Honsla Rakh which is currently being filmed.