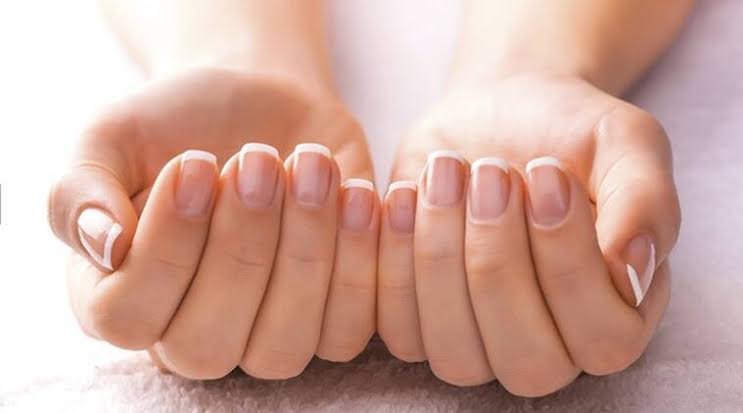 Being aware of the health of your nails can warn you of all underlying health conditions. In some cases it can save lives too! See what can be hidden: brittle nails make them weak and break. The cause has yet to be discovered, but there are several causes. One of the most common causes is aging and lack of nutrients. When the nails begin to part horizontally it is called onychoschizia, but when they open in the direction of nail growth it is called onychorrhexis. Pale nails are a common sign of aging. More than 3 in 4 older adults 60 years old have pale nails. However, in some cases, pale nails can also be a sign of certain underlying health problems:
Anemia
Malnutrition
LiverDisease
HeartFailure
Always check with your doctor. Our nails can turn white with a nail injury, but if all of your nails are slowly turning white you should see a doctor right away. White nails with a pink band on top of the nail bed become hot Terry’s nails, and they can indicate a serious health condition . This symptom can indicate conditions such as cirrhosis of the liver, chronic kidney failure, and congestive heart failure. Terry’s nails can be a serious health problem, but they can also be a sign of aging. Yellow nails are most commonly caused by fungal infections.

They are also present in the hands of regular tobacco users. If your yellow nails resist fungal treatment, they could indicate psoriasis, thyroid problems, or diabetes.
A rare condition called “yellow nail syndrome” (YNS) occurs in patients with severe lung disease and swelling of the extremities, but only in patients over the age of 50 and sometimes in children. On its own, but if not, vitamin E can help.
There are several reasons that can contribute to blue nails:
Silver poisoning can lead to the formation of silver deposits in the nail bed, which lead to nail pigmentation. This irreversible condition worsens with increasing exposure to silver.
Certain drugs, such as drugs used to treat malaria, help regulate heartbeat, and treat liver disease, can also cause blue pigmentation.
people who have contracted HIV may also have blue nails. They can be caused by infections as well as antiretroviral drugs.

Previous post Do you suffer from frequent nightmares? What You Should Know

Next post Coronavirus Explainer: All About the Lambda Variant of Coronavirus, Identified in More than 25 Countries